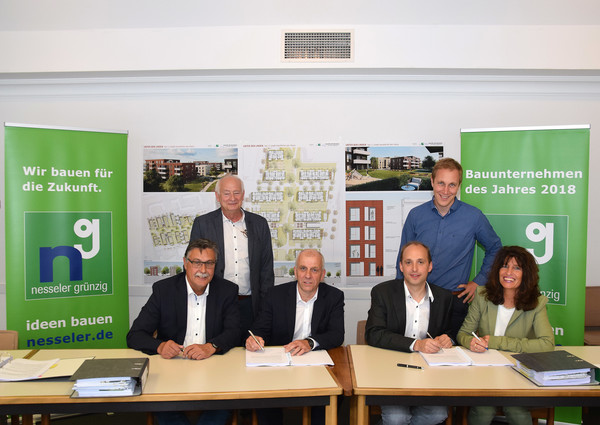 The "Unter den Linden" neighborhood will be provided with plenty of green spaces. Simulation by "nesseler grünzig"

A total of 232 new apartments for rent, about 30 percent of them subsidized social housing: the "Unter den Linden" project by the municipal housing subsidiary "Monheimer Wohnen" is on the home straight. The signing of the construction contract for the development in the Berliner Viertel neighborhood with building contractor Nesseler Grünzig from Aachen has taken place in the City Hall. Construction is due to commence at the beginning of next year, with staggered completion by 2021. "Demand is high in the housing market. We are taking appropriate action as a local authority," emphasizes Mayor Daniel Zimmermann.

The new development is being built on the 22,600 square meter site of the demolished Anton Schwarz secondary school between Erich Klausener Strasse and Grunewaldstrasse. The mix ranges from studio apartments with a small second room to four-bedroom homes. The project includes underground parking. Outdoor areas will be landscaped with plenty of green areas." It is an attractive mix with something for everyone from single-person households to big families," as City Treasurer Sabine Noll and Michael Lobe, head of the City's Property Management department explain in their capacity as managing directors of "Monheimer Wohnen." Precise dates for tenancy acquisition have not yet been fixed.

Registered applicants will be considered automatically

Tenancy application forms are available from today at the Citizens Office and for download from www.monheimer-wohnen.de.