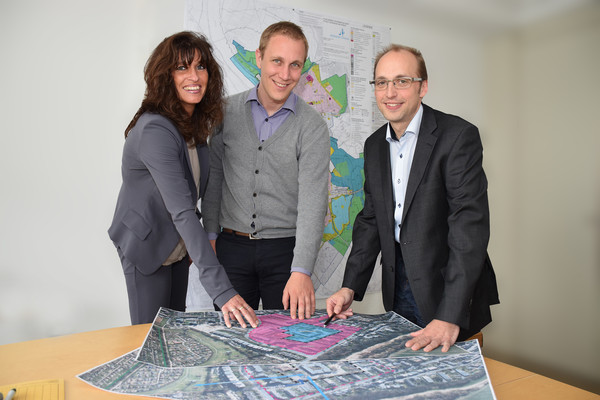 Monheim am Rhein. There is a housing shortage in Monheim am Rhein. This is due firstly to its location between the two big cities on the Rhein, Düsseldorf and Cologne. This position is the main reason for our own success. In the past four years alone, 2,200 new jobs have been created here. Many people have had enough of commuting. Along with its 'soft' location factors, the abolition of kindergarten and full-day school fees make Monheim extremely attractive, especially for young families. This success, however, has raised pressure on rents, with demand by far exceeding supply. This problem is not new. It is already two years since the politicians and city administrators decided that something had to be done. The municipal administration headed by Mayor Daniel Zimmermann came up with the plan: establishment of a municipal development housing company.

"We won't be able to prevent rent rises with this, but at least we will be able to slow down the trend somewhat," explains Mayor Daniel Zimmermann. If the politicians give the go-ahead, Monheimer Wohnen GmbH will take shape very soon, and the first development project will create around 385 apartments for rent, in blocks with several floors. Thirty percent of the units will be subsidized as social housing. The remainder is intended for middle and better-income tenants. "Having our own municipal housing association enables us to keep more control over the social mix and also the outward appearance," says the Mayor. The starter's gun is poised to launch "Unter den Linden." The 22,000 square meter development site includes the secondary school in Berlin Quarter, which has now come to its scheduled closure. Building work on about 200 apartments is planned to begin as early as 2017.

Soon after, the site of the special needs school in Geschwister Scholl Strasse will be added when the school closes. That means a further increase of approximately 25,000 square meters for about 185 housing units. Competitive expert assessment procedures for both sites are currently in progress. The final presentations will take place on Monday, June 27, from 6 p.m. at the Municipal Services Center (Bürgerhaus), Humboldtstrasse and, two days later, in the Adult Education Centre (Volkshochschule, VHS), Tempelhofer Strasse, also at 6 p.m.

Monheimer Wohnen will be capitalized with just under 50 percent equity. Investment by the local authority will amount to 29 million Euros plus the value of the development sites contributed by the local authority. The new company will be located at MVV (Monheimer Versorgungs- und Verkehrsgesellschaft GmbH), which is the umbrella holding company for the other municipal subsidiaries such as MEGA, the public transport company or the all-weather swimming pool. "It's a worthwhile investment because we will definitely not be subsidizing rents. However, we want to make the whole thing fair," says Daniel Zimmermann.

There will be a Europe-wide invitation to tender. It not only covers the building of the apartments but also includes the initial tenant acquisition. The new municipal subsidiary will take over the housing units one-by one with its own staff. The first managing directors of Monheimer Wohnen have already been head-hunted: Sabine Noll and Michael Lobe. The two of them should complement each other well on the basis of their specializations alone. The city treasurer is obviously adept at handling finance, while Michael Lobe's expertise as the head of the City's Department of Building and Property Management has a strong background in building matters.

By the way, during the approximately one-year preparation phase for the establishment of the housing association, Monheim received support from Berlin. The Federal Ministry of Finance declared Monheimer Wohnen to be a pilot project. No funding was involved, but Monheim received 100 days of free consultancy by ÖPP Deutschland AG.

Registered applicants will be considered automatically

Tenancy application forms are available from today at the Citizens Office and for download from www.monheimer-wohnen.de.